You are not supposed to make such moves.

Anyways we are not judging anyone. Just stating the facts, this joke made Google apologize to people because it went viral as soon as the first guy posted about losing his job.

The idea behind “The Joke”

Just like everyone else, Google thought of adding some fun in the April Fools’ Day by introducing a feature right next to the Gmail reply button. This feature was a simple “Mic drop” button. This button if clicked would not only reply to the email and archive it but also add a GIF of our favorite minion from “Despicable Me” who drops a mic.

Google explained about the joke in a blog post explaining the gist of the joke. They actually tried their best to make it funny by saying that you can enjoy this feature when you receive frequent emails from work and you just know that everyone is wrong except you and then there are those times when your opinion matters and sometimes you just want to play it cool like a boss.

The joke didn’t turn out to be funny though

The joke didn’t make a really great impact and people lashed out quite soon after that.

People responded and the Google’s product page was full of claims saying that they accidently clicked the button as it was right next to the reply button and now their fully professional email is nothing more than a joke. The forum was full of complaints as people said that placing this feature right next to reply button was a mistake as people accidently click it especially when they don’t know what it is for. 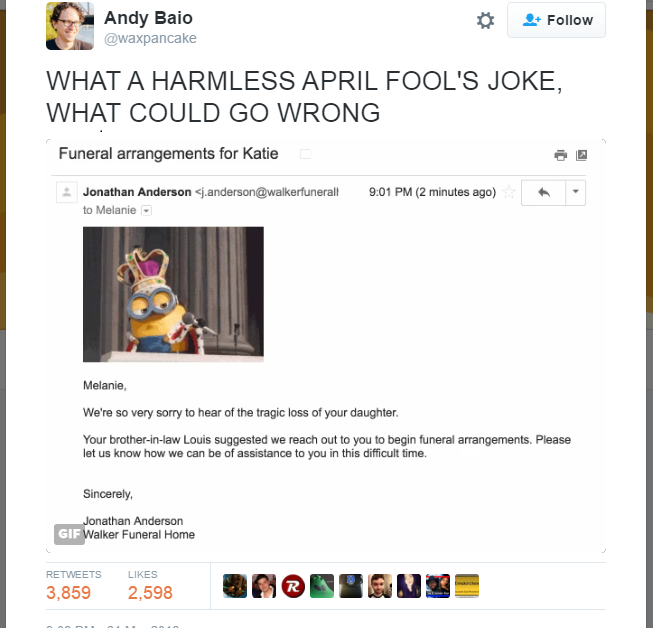 Many people got affected by this prank worldwide as many of them complained that they lost a potential job because of this prank.

There are claims that the stories might actually be not true

As it was April Fools’ Day, it is not possible to verify all these stories and claims that are being made and that these stories must be made up to defame google. This can be true but the fact that google has 900 million users can’t be denied. When the count is this huge numbers, it is hard to verify the stories but considering that this feature was live for 12 hours, these stories seem pretty legit.

Google had realized that many people are getting affected by this feature and instantly stepped back and took down the feature from Gmail. The company made a statement and one of the representatives from the company said that it is pretty obvious that the joke is actually on the company this time. He further said that due to the bug, this MicDrop feature made people worried and caused them stress instead of making them laugh. He said that they were extremely sorry and that the feature had been pulled off from the Gmail. He also said that if some users were still seeing this feature, it could be resolved by reloading the Gmail page.

Well, its pretty good action by Google! It can’t make up for the loss but we hope that the bosses understand that this had been a joke and let the matter pass by!