The 5 Stages of Nail Melanoma

Nail melanoma is a life-threatening skin cancer that grows to affect the nails, usually the big toe and thumb. This disease can prove to be very deadly, however treatments are readily available if diagnosed early.

This disease is often referred to as, Malignant Melanoma of Nail Unit or Nail Unit Melanoma.

There are 5 stages of Nail Melanoma, stated as follows; 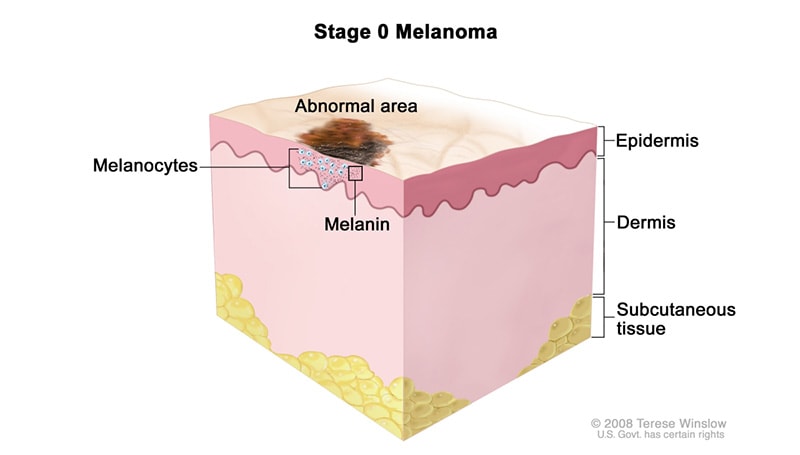 This stage is also referred to as Melanoma in situ, meaning site of origination of Melanoma. At this point, a tumor has formed on the outermost layer of the skin, epidermis.

Stage 2: aka Stage I Melanoma 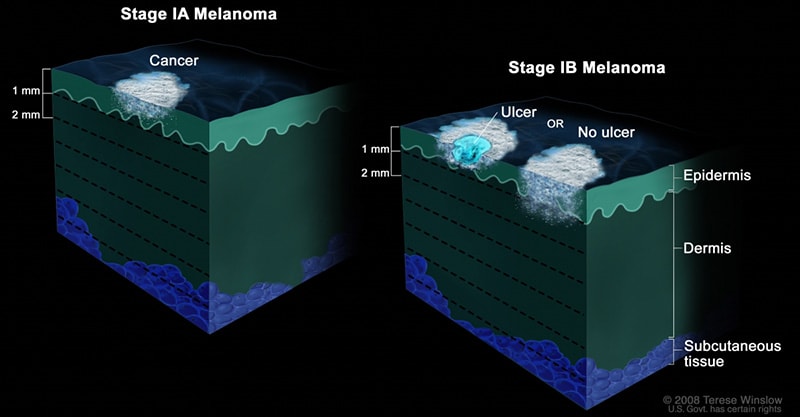 This stage is further categorized into two:

Stage IA: At this stage, the tumor is less than a mm deep and has no signs of an ulcer.

Stage IB: At stage IB, the tumor has spread to the Dermis layer, which means it is 1 to 2 mm deep, but has no signs of Ulcer.

It is less than a mm deep, thus not pierced through the dermis, but has been ulcerated. 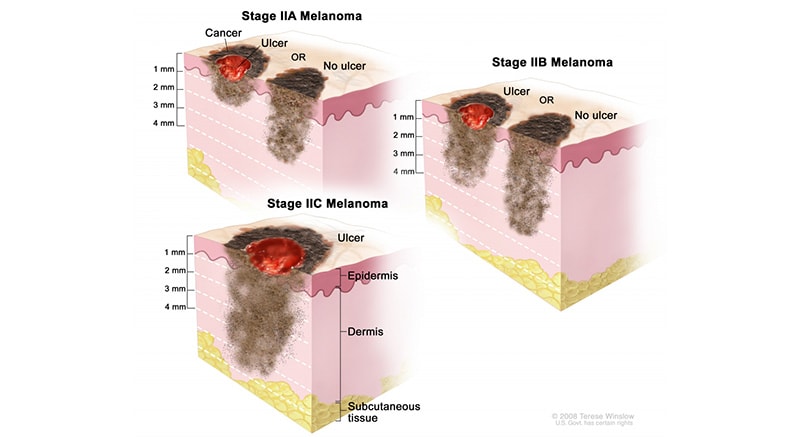 This stage is further divided into three:

Stage IIB: At this stage, the tumor has further deepened up to 4 mms, and has ulcer OR it has deepened beyond 4 mms but has no signs of ulcer.

Stage IIC: At this stage, the tumor is ulcerated as well as deepened beyond 4 mms. This tumor may not have reached the layer of tissue or lymph nodes, but it very well can, if not treated on time. 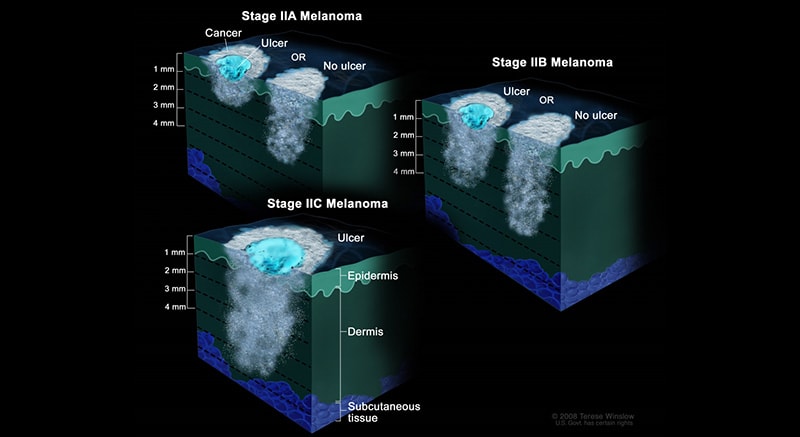 At this point the Melanoma has entered the later stages. It is further broken down into 3 stages – IIIA, IIIB and IIIC, which involve a variety of factors resulting in their breakdown, such as how deep the tumor has traveled, presence of ulcer, what nearby lymph nodes has it affected, etc.

At this stage, the tumor has pierced itself into the tissue layer or have traveled to nearby lymph nodes. The ulcer may or may not be present. However, no far off organ has yet been affected.

Also known as Metastatic Melanoma, at this stage the cancer has reached out to far off organs, affecting them severely. This is the last stage of this cancer, and clearly one of the most dangerous. There was a time, before the year 2011, when there were no medications, to help treat this stage of Melanoma, but now there are several options available.

The most commonly affected areas at this stage, are the brain, liver and lungs.

Physical signs and symptoms of Nail Melanoma may or may not be easily detected. It may start to develop at the site of an existing mole or appear in a completely new place.

In lay man’s term, a brown, black or blueish line that runs vertically, which means top to base, is a concerned sign of nail melanoma.

Another diagnostic ruling that has helped clinically diagnose as well as self-diagnose, Nail Melanoma at an early stage, is the ABCDEF rule. Each letter stands for a symptom, as follows:

B – Brown or Black colored band that runs vertically on or under the nail and is wider than 3mm.

C – Change can be seen in the pigmented band, over time.

D – Digit involved. Usually, it is either the thumb or the big toe. But cases of index finger have also been seen.

E – Extension of the discoloration. The cuticle or nail fold has also started to appear black or brown.

Treatment differs according to each stage of Melanoma.

Stage 0 to II are early stages, which require low-grade treatments. Which involve removal of the mole or affected tissue. It may or may not be a small excavation, depending on the thickness and how far along the Melanoma has penetrated. The thinner, or less penetrated the Melanoma, the better chances of cure. Further examinations of skin are required, every 3 to 6 months, by a professional along with self-examination, every month.

For Stages III and IV, where the cancer has spread beyond the nail and skin to other organs of the body, high-grade treatments plans are required which include more than one of the given procedures:

For more information regarding Melanoma cancer and the likes, visit;