Trypophobia and its Causes –How Do You Get Trypophobia?

No common man knows the answer because people don’t have interest in how and why they suffer with that condition. With the advent of internet and gradual increase in number of people using it, they are getting more connected to each other through different websites.

As they get connected they discuss their problems and feelings more and more with each other.

The initiation of the disease trypophobia has its roots there.

What happens is that on certain websites they discuss their specific problems and if they share same problem with someone else they get a contended feeling that they are not alone feeling some strange symptoms.

If more than one person approves their symptoms that leads to the formation of discussion communities and forums discussing a specific topic. Eventually resulting in formation of a medical condition.

Trypophobia is a psychological condition where a person fears of holes, pods, circles, or cracks especially those found in nature. This results in overall itchiness and mental uneasiness. E.g. Lotus seed pods, Holes in walls caused by bullets, Honeycomb, Bone marrow, Wasps’ nest, Cavities in teeth.

Literally, trypto is a Greek word meaning “hole” and “phobos” meaning “fear”. After reading from the beginning and looking at those creepy pictures you may be asking yourself, “Do I have tryptophobia”?

Despite the trypophobia definition this condition has no medical grounds and has not gained a medical status until now, it was first described on internet in 2005, in the same way described above.

As one of the psychiatrists, Carol Mathews said,

“There might really be people out there with phobias to holes, because people can really have a phobia to anything, but just reading what’s on the Internet, that doesn’t seem to be what people actually have.”

According to her. Most people writing on internet about this as a phobia seem only irritated by the site of these kind of images without knowing what the real phobia is. 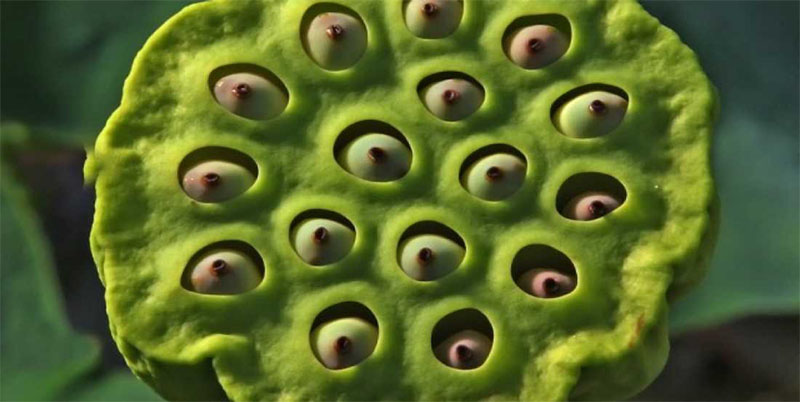 As this condition has not been given the status of a phobia, the factors causing this can’t be truly diagnosed. But what scientists have discovered is that this condition is actually a brain response producing a reaction to the sight of shapes. Actually brain associates the sight of some specific shapes to danger.

This might be due to the past experiences or the preliminary knowledge about some shapes e.g. holes made by insects, holes in wounds and diseased tissue such as those caused by mango worms in animals, especially dogs. These specific shapes consist of clustered holes in innocuous perspectives such as fruit and bubbles. As a result people associate these with something hazardous coming their way or potentially poisonous.

Other causes for trypophobia may include age-related changes, situations and life experiences. There are also cultural causes which emerge due to discussion, views and opinions about trypophobia in national associations, discussion forums and public gatherings.

The reaction of people on seeing these shapes are different. Some of the reactions are as follow:

Psychiatrist Carol Mathews believes that the responses are more likely from priming and conditioning.

Trypophobia skin is denoted by the allergic reactions in skin, they can range from paleness, redness, excessive sweating, trembling and sweating on the limbs and difficulty breathing.

In extreme cases the skin can undergo Goosebumps and bright spots but the pictures viral on internet about “holes in the skin disease” that is formed with a certain insect bite are all fake. The photo shoped pictures of trypophobia on hands, fingers, knees and etc. all develop holes in skin phobia in the viewers.

A simple way to get rid of this phobia is not to give deep thought or the look to these pictures. Or it can be the other way round, i.e. keep looking at these pictures frequently so you get desensitised to them.

People search on internet about the test for trypophobia as they get worried by the content available online which horrifies them about whether they are phobic or not. But again it is implied that as this is not a phobia so there is no specific test for the condition. However, as this fear is a reaction of watching particular images i.e. of innocuous clusters of holes, its test can be done with their help. Trypophobia test pictures can produce that specific response which can approve Trypophobia.

So the test and diagnosis for this can be done in following ways:

The cure for trypophobia involves cognitive behavioural therapy, neurolinguistic programming, and other psychological therapies which can effectively treat patients.